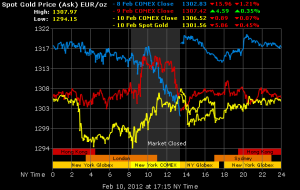 This post is going to be used to collect sources of real-time online data of interest to this blog. This blogpost will be updated regularly.