How Many Solar Panels Needed To Power Entire World? 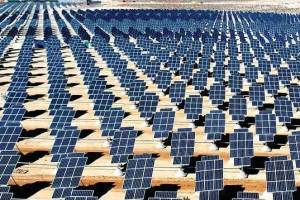 Actually, surprisingly little: 496,805 square kilometers. That’s Spain. And this is the replacement of the world consumption of energy in all of its forms (barrels of petroleum, cubic meters of natural gas, watts of hydro power, etc. or 199,721 TW•h per year). And there would be more than enough otherwise useless space in the Sahara to do that. Not that we advocate that, for political reasons. It’s better to have a distributed system, like panels on every roof, just like there are hundreds of millions of computers under these roofs as we speak.

Next question, how much energy does it cost to setup such a gigantic new energy base? From this source: it takes 400 kwh/m2 (multicrystalline solar cell). A barrel of oil contains 1700 kwh, it takes less than a quarter of a barrel to produce one m2 panel. And I would be surprised if the new solar film cells cost even less. In other words, the world ‘only’ needs 0.12 trillion barrel of oil to construct a radical new energy base, based on solar, in the light of one trillion barrel remaining oil reserves. That is doable (in terms of remaining carbon capital).

Posted in solar and tagged solar