Copenhagen Infrastructure Partners (CIP), a leading global fund manager focused on renewable energy investments, and an industry leader in offshore wind, has signed a partnership agreement with four internationally renowned companies within marine and offshore construction services, to develop the energy island in the Danish North Sea. CIP acts as project developer on behalf of an investor consortium composed of PensionDanmark and PFA, two of Denmark’s largest pension funds, and Denmark’s largest utility company, Andel (collectively known as the “VindØ consortium”)… The four chosen contractors are ACCIONA, Boskalis, DEME and MT Højgaard International, each of which offer a unique set of capabilities and experience… The energy island in the North Sea will be located approximately 80-100 kilometres off the Danish west coast, where conditions for green energy production based on offshore wind are optimal. The island will be able to connect 10 GW of offshore wind to Denmark and other neighbouring markets, host an innovation zone with potential for large-scale energy storage and Power-to-X technologies, and provide accommodation and operation and maintenance services from onsite harbour facilities.

There are environmentalists among us, who are so radical, that they are attacking the renewable energy transition, as adopted by many governments, first and foremost in Europe (EU). This is most of all a North-American movement, that combines its fundamentalist environmentalism with anti-capitalism, feminism and hard-left social policies. This is a fringe movement, that has no chance of becoming mainstream, certainly not in Europe. Not even the German Greens are this radical, let alone this site (I voted CDA in the last Dutch national elections; if I had had a German passport, I would have voted Laschet-CDU). In fact, it is already a miracle that Europe has adopted the Green Deal, that seems to be supported by the majority of the population (wait until the first black-out arrives, or gas shortages become prevalent, perhaps later this winter).

But, as proponents of free speech, here they are. It is always good to look at a problem from all angles.

Derrick Jensen (born December 19, 1960) is an American ecophilosopher and radical environmentalist in the anarcho-primitivist tradition. Utne Reader named Jensen among “50 Visionaries Who Are Changing the World” in 2008.

I have a SE-facing 10 x 2.2 m = 22 m2 garden fence, not covered by shade from trees, that in principle could be used as an “energy wall”, consisting of PV-panels, with a double-glass cover, to trap solar radiation and convert it in both electricity and warm air. Over the entire year, the vertical energy wall would not yield optimal energy gain, but the point is that you need energy much more in the winter than in the summer, so the vertical position of the fence matches the low position of the sun during the winter.

This post will contain inspirational ideas from already implemented projects and as such updated regularly.

The idea is to build a “box” of 10 m x 2.2 m x 10 cm. Since double glass is cheap and durable in the weather, let’s assume that both sides will consist of double glass

[glaskoning.nl] – price 2 x 10 m x 2.2 m double glass = ca. 932,- euro. The glass back sheet needs to be a black sheet, like blackened triplex or steel wool mesh, or simply painted glass, details to be decided later, after some thermal modelling and calculations. Alternatively I could replace the old fence with a newer solid one that could act as the back sheet, perhaps with an insulation layer over it.

At a later stage, the back sheet can be covered from the inside with solar pv film panels. 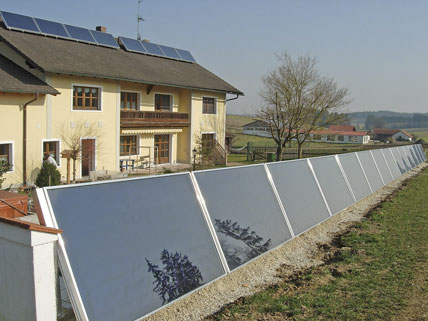 [source] 41 m2 garden fence solar, something like this I have in mind. 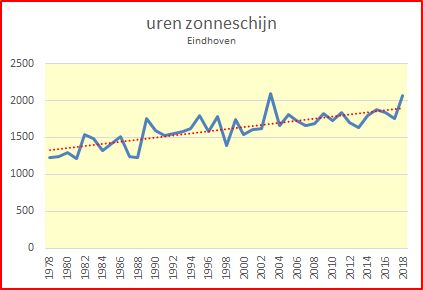 [source]
The number of hours sunshine in Eindhoven increased significantly over the last 40 years, from 1350 to 1800!

END_OF_DOCUMENT_TOKEN_TO_BE_REPLACED

Tidal Energy Could be Huge – Why isn’t it?

It’s estimated that we could (practically) capture enough tidal energy to power all homes in the United States TWICE over – but we can only manage a tiny fraction of that right now. For a planet that is 70% water, why is this technology still so far behind other renewables? Are things about to change?

We’re destroying our environment at an alarming rate. But it doesn’t need to be this way. Our new channel Planet A explores the shift towards an eco-friendly world — and challenges our ideas about what dealing with climate change means. We look at the big and the small: What we can do and how the system needs to change. Every Friday we’ll take a truly global look at how to get us out of this mess.

BASF is the largest chemical producer in the world, with ca. 117,000 employees and a revenue of ca. €60B. If they decide to set up a new business branch that will be responsible for the internal renewable energy transformation, you know something big is happening. Currently, its European operations consume 9 TWh of electricity annually. This is expected to grow up until 2050 by a factor 3-4, all from renewable sources.

To this end, BASF participates in the planned Hollandse Kust Zuid offshore wind farm and other major North Sea projects. In their own words, BASF is committed to a “make-and-buy strategy”. BASF has set itself emission-reductions targets of 25% by 2030 (compared with 2018) and net zero by 2050.

OCI Placing its Bets on the Methanol Economy

OCI Methanol Group benefits from several strategic advantages as the only producer with facilities and extensive distribution and storage capabilities in the United States and Europe, which are located near major inland demand centers or on major global shipping lanes next to key bunkering hubs.

[oci.nl] – OCI N.V. Enters into Strategic Alliance with ADQ and Alpha Dhabi Holding through Placement of 15% of Methanol Group

OCI N.V. (NYSE Euronext: OCI) today announced it has reached agreement to acquire BioMCN, a methanol producer and pioneer in bio-methanol production based in The Netherlands, for EUR 15 million.

BioMCN is one of Europe’s largest methanol producers and owns two methanol plants, of which one is operational (production capacity of 440 ktpa) and one mothballed (430 ktpa). The plant site is located at the Chemical Park Delfzijl, The Netherlands, is connected to the national natural gas grid and has easy logistical access to major European end markets via road, rail, barge and sea freight.

The acquisition creates a foothold for OCI in the European methanol market. Methanol consumption in Western Europe is currently more than 7 million tons per year, of which approximately 30% is used in transportation fuel applications. Europe currently imports more than 5 million tons of methanol and this deficit is expected to continue to increase for the foreseeable future.

[oci.nl] – OCI N.V. Has Reached Agreement to Acquire Methanol Producer in The Netherlands (2015)