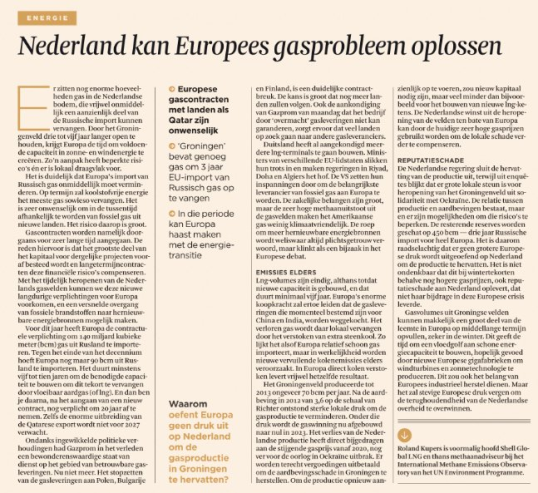 Many in Europe, and especially in Germany (40% dependency), fear that Vladimir Putin might close the natural gas tap to Europe, later this year, with severe consequences for EU-households and firms. EU-politicians are travelling around the world, hunting for Ersatz of Russian gas.

Relief could come from an unexpected corner: the Netherlands.

A few years ago, that country has begun winding down its profitable gas exploitation, because of soil subsistence, threatening at least hundreds of houses in the Groningen province, and the desire to phase out fossil fuel as soon as possible. This may have been premature, though, in the light of recent geopolitical developments.

A former Shell CEO, Roland Kupers, broke a lance today for renewed Dutch gas exploitation, in suggesting that the Netherlands should step into the gas supply void, (potentially) left by Russia. How much has the Netherlands to offer? Actually quite a lot: at least worth 1000 billion euro. On top of that, there are voices that claim that with new technologies, the damage to homes can be limited, by injecting nitrogen gas in the soil. 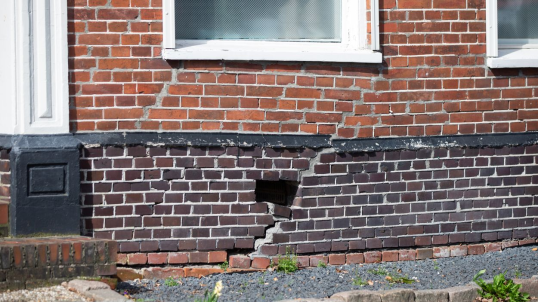 Typical damage to homes, due to soil subsistence. But is it worth stopping gas exploitation because of this? Homeowners can be easily compensated from the extra returns.

And if you see developments like with thin film solar, where 1 m2 “panel” will soon cost merely a few euros, the Netherlands would be well advised to throw its remaining gas reserves on the European market, before it becomes a stranded asset. 1000 billion euros could turn its already low public debt of 500 billion euro into a surplus of 500 billion. Or, preferably, massively invest in North Sea offshore wind parks, that can service the entire EU and prevent that the Norwegians and their 1000 billion state fund own everything.

These printable solar cells created by the University of Newcastle and CSIRO are flexible and can be printed like newspapers [📹: https://t.co/dfYiQ0oG6K]pic.twitter.com/Nq6wIXZZb0