Archive for the category “UK”

Could be used in abandoned mine-shafts.

In theory could be combined with geothermal energy. If you are going to drill a very deep hole of several kilometers anyway, you might as well make it wider and apply a massive concrete or iron “piston” of several tens of meters high and a few decimeter in diameter.

Gravitricity is a bad idea and has a 19th century coal mine smell about it.

For seasonal storage of energy, the last remaining missing link to guarantee a total victory of renewable energy, the solution will be either chemical energy storage (like hydrogen) or storage of heat in large water volumes or perhaps CAES. 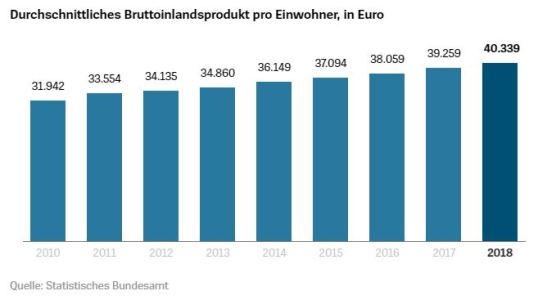 Germany, as a distinct culture circle, exists for more than 1000 years, yet in the past decade they managed to add ca. 30% to their income. Most other European countries did also well, Holland even better.

Both German #1 “paper” MSM der Spiegel, as well as Dutch banking giant ING, evaluate the decade that is now coming to an end and come to the same conclusion: it was a “golden decade”.

But both institutions suspect that the coming decade won’t be as golden and we agree.

The surplus countries in the current account balance overview below are most Europeans (including Russia), Japan and China… 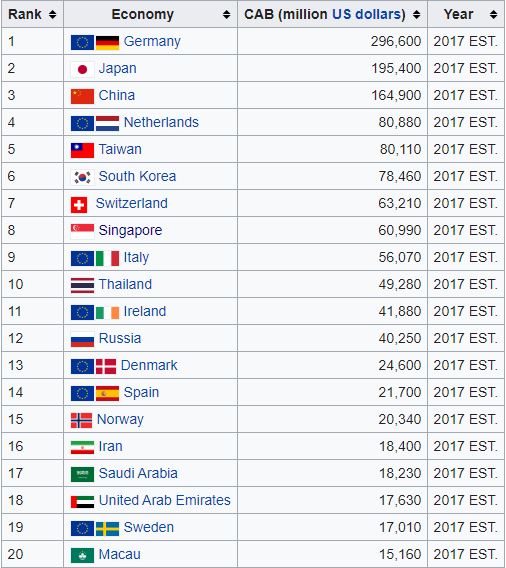 …where the Anglo countries (and France) are the countries with the largest deficit:

This is a clear indication that the political and economic center of gravity is moving away from Anglosphere towards Eurasia. Anglo-supremacy will be seen in hindsight as stretching from 1815-2016, from the Battle of Waterloo and the steam engine to Brexit and Trump. The West is as good as over.

Entropy and the Stirling Engine

Hydrogen Economy Taking Off in Europe

There are several large players in Europe positioning themselves for competition on the market of large-scale electrolysers/fuel cells, think 20-100 MW. Key-players are Siemens and Thyssen-Krupp in Germany, ITM in Britain, Nel-hydrogen in Norway, Gasunie and Akzo-Nobel in the Netherlands, just to name a few.

The yearly Hannover Messe is a good place to get informed about the state of the art of hydrogen engineering.

END_OF_DOCUMENT_TOKEN_TO_BE_REPLACED

Hydrogen economy taking off in the UK. Market leader ITM Power has opened a electrolyser equipment manufacturing facility in Bessemer Park, Sheffield, UK, the annual output of which will be able to convert 1 GW electricity in hydrogen, that is the output of an entire standard conventional power station.

END_OF_DOCUMENT_TOKEN_TO_BE_REPLACED

UK Halts All Fracking Operations In The Country 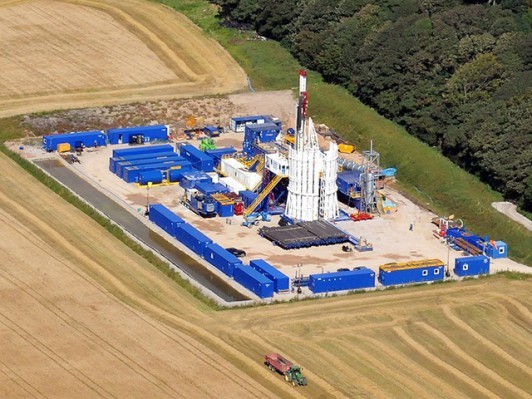 As PM Boris Johnson said the other day: “Britain is European”. 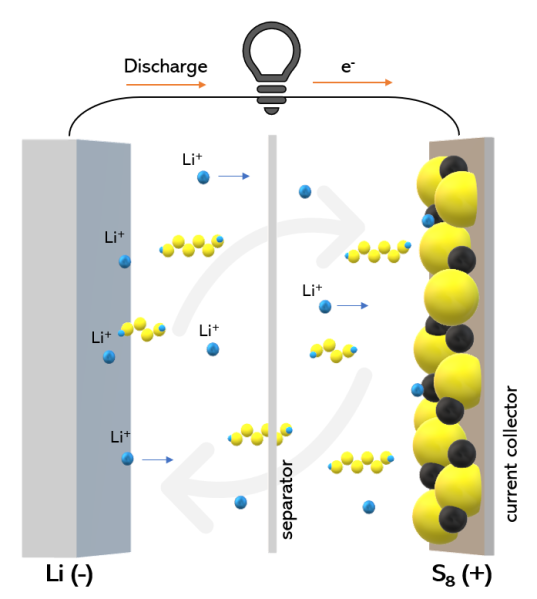 “Lightweight Battery systems using metallic Lithium are known to offer the highest specific energy. Sulfur represents a natural cathode partner for metallic Li and, in contrast with conventional lithium-ion cells, the chemicals processes include dissolution from the anode surface during discharge and reverse lithium plating to the anode while charging. As a consequence, Li-S allows for a theoretical specific energy in excess of 2700Wh/kg, which is nearly 5 times higher than that of Li-ion. OXIS’s next generation lithium technology platform offers the highest energy density among lithium chemistry: 400 Wh/kg already achieved at cell level… Cost Effectiveness Li-S production cost projections are significantly lower than Li-Ion due to lower raw material cost (i.e. Sulfur) and high energy density (less material required for same energy). This cost advantage is expected to be a key driver for widespread adoption of Li-S technology. Full discharge OXIS cells have a 100% available Depth-of-Discharge. This compares with Li-ion batteries which are only used across 80% (or less) of their available discharge range. OXIS cells use all their stored energy – full discharge. Maintenance free OXIS cells have an indefinite shelf-life, with no charging required when left for extended period. Li-ion batteries require a recharge every 3-6 months to prevent failure and often causes significant warranty issues. Eco friendly The OXIS Li-S chemistry is considered to have less environmental impact when compared to other technologies such as Li-ion. The Li-S cell utilises sulfur in place of heavy metals such as cobalt, which have a significant environmental impact, whereas the sulfur used in OXIS manufacture is a recycled material, a by-product of the oil industry.” 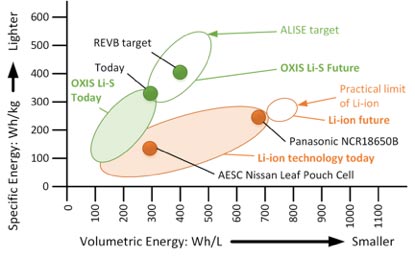 END_OF_DOCUMENT_TOKEN_TO_BE_REPLACED

British research club reports the results of their analysis of a liquid air storage system (LAES). The idea is to use renewable electricity to liquefy air for energy storage purposes. Result: storage cost 11 euro cent/kWh for a 20MW/800 MWh storage installation at a round-trip efficiency of ca. 50%. Storage pressure ambient. Recuperation by boiling the liquid and drive a turbine in a Rankine cycle. Efficiency could be increased by combining solar of waste heat, thus increasing the temperature at the expansion phase. Storage of liquid air in large volumes is fairly easy with an energy density of 83 kWh/m3.

To really solve the renewable energy storage problem, as a rule-of-thumb, a country needs to be able to store ca. 41% of its annual energy consumption, in order to reasonably guarantee energy supply security. Let’s apply this to a country like the Netherlands, with an average power need of 13 GW. Given the energy density of 83 kWh/m3, a storage volume of 562 km3 would be required, which is unrealistic. Liguid air storage is a short term storage possibility (think in a range of hours, not months).

The real solution of the long term storage problem doesn’t lie in gravity batteries or even phase change solutions, like the one presented her, but in combustible material, reduced with renewable means: hydrogen, iron powder, borohydride, ammonia, methanol, formic acid and a wide range of other possibilities. 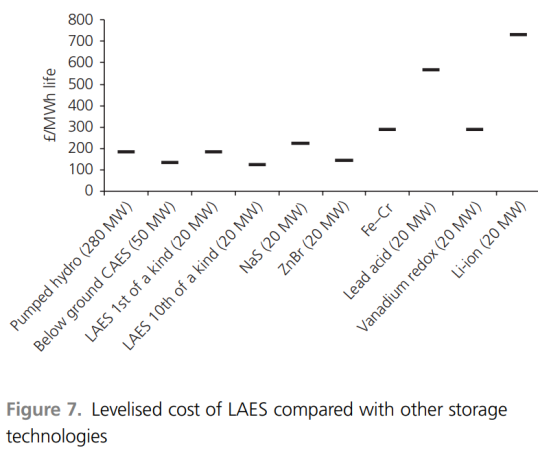 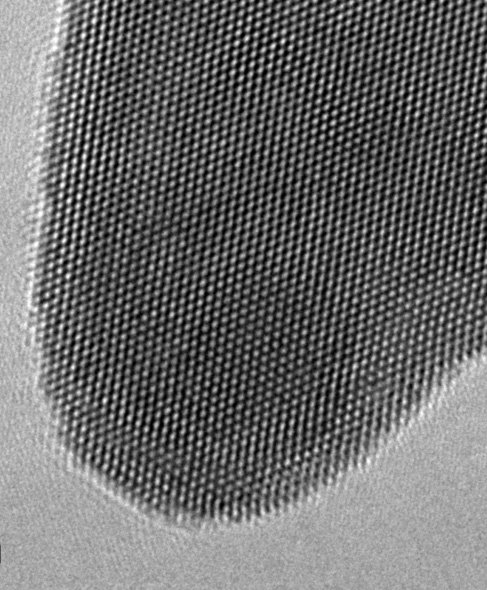 Important development since a surface like this keeps its macroscopic properties as catalyst. There are many important applications where expensive catalysts play an crucial role. Now price of a material hardly matters anymore.

Britain Could Do Without Coal for More Than 8 Days 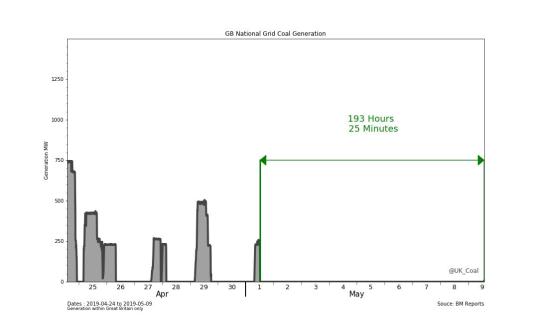 This is the longest run without coal for Great Britain since 1882. 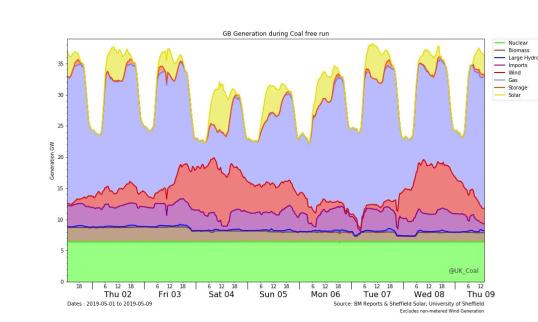 According to the Committee on Climate Change, Britain needs to quadruple its inventory of wind turbines from 1,900 now to 7,500, as well as increase the British area of forestation from 12% to 17%, in order to meet the climate targets. Wind power would increase from 8 GW now to 75 GW. Jobs would remain constant.

[dailymail.co.uk] – Number of wind turbines in the UK needs to QUADRUPLE to 7,500 and the nation should plant ‘enough trees to cover Yorkshire’ in order to meet strict Government climate targets
[wikipedia.org] – Committee on Climate Change

Renewable energy sources, such as wind and wave, can power our world. Currently, mechanical gears are used inside of these energy conversion systems to connect a high-speed electric machine to a low-speed physical energy source. Improving the design of the systems that convert these sources into electrical energy has far-reaching benefits.

END_OF_DOCUMENT_TOKEN_TO_BE_REPLACED

Air-conditioning, how it all began in 1833 in Florida with John Gorrie.

Ca. 20% of the world’s energy budget is used for cooling, tendency upwards. Today most refrigerators use flammable hydro-fluorocarbons and hydrocarbons as a working fluid, not exactly environmentally friendly. On top of that, cooling efficiency is not stellar either.

Researchers from Spanish and British universities propose to swap the working fluids mentioned above, with inexpensive neopentyl-glycol (NPG), a material that has a crystal structure, that places it between solids and liquids, due to weak bonds between the atoms of the compound. The material can be compressed, almost as if it were a gas, like with conventional refrigerators. Achievable cooling temperatures are comparable with conventional cooling machines.

It has been reported that plastic crystals of neopentyl glycol exhibit a colossal barocaloric effect (CBCEs), which is a cooling effect caused by pressure-induced phase transitions. The obtained entropy changes are about 389 joules per kilogram per kelvin near room temperature. This CBCE phenomenon is likely to be very useful in future solid-state refrigeration technologies. 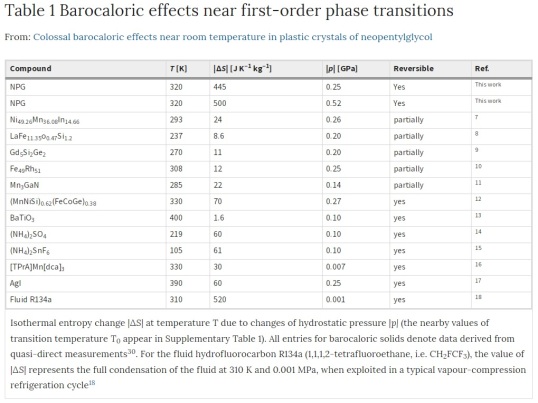 END_OF_DOCUMENT_TOKEN_TO_BE_REPLACED

Salt Water Battery that Charges in Seconds and Changes Color

Charge and discharge in seconds. Note how the anode (left) turns from blue to transparent to blue again. The cathode (right) turn from green to brown to steel grey.

Development from the Imperial College in London: salt water battery that charges and discharges in a matter of seconds and changes color to indicate the charge status of the battery. No toxic or flammable materials used whatsoever, only polymers (plastic) and salt water.

Hydrogen Economy in the Orkney Islands 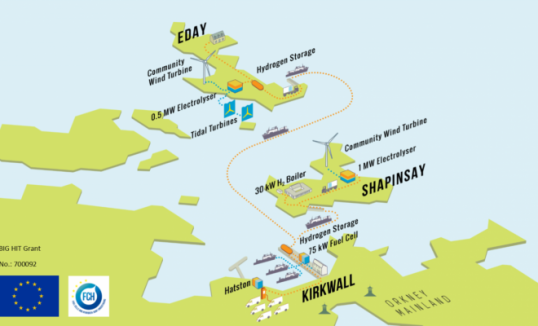 The Scottish Orkney islands produce more renewable electricity from tidal and waves than it can consume, which creates some space to experiment a little, with hydrogen. The largest distance on the main island is merely 24 miles, so max. vehicle range is not an issue. Now the inhabitants have a dream of running their cars, ferries and boilers on hydrogen. All of them. With 21,000 inhabitants the project seems to be doable. By 2021, the world’s first hydrogen sea-going ferry should be in operation here. The ambition of the people of Orkney is to be an inspiration for others.

[bbc.com] – How hydrogen is transforming these tiny Scottish Islands 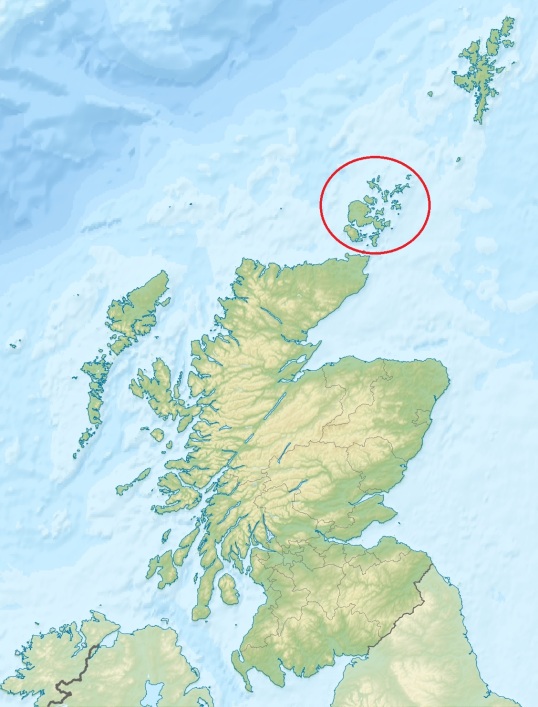 END_OF_DOCUMENT_TOKEN_TO_BE_REPLACED

The Engines of the Renewable Energy Age

Now that the petrol and diesel internal combustion engines are on the way out, the question rises: what will replace them? One candidate is obvious, the electro-motor, powered by renewable electricity, with a battery or hydrogen fuel cell as intermediary storage stage: 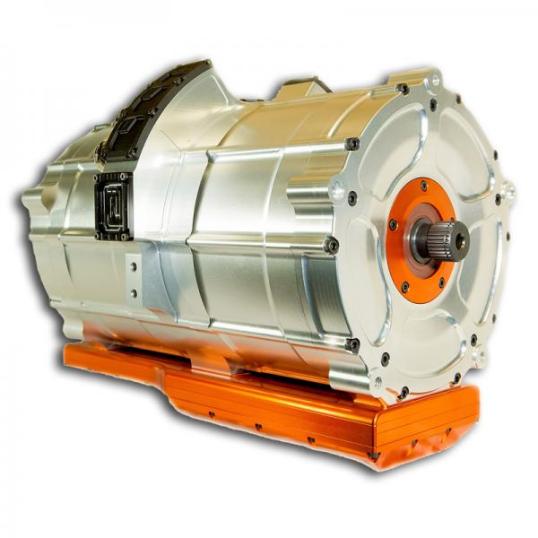 But what if we only have heat available as an energy source, for instance from burning biomass, methanol, ammonia, or even metal powder like is shown here (0:43 – 1:20):

The answer to that question would be the Stirling engine. A Dutch-based company called Microgen claims (in 2014) to be the first to mass produce a stirling engine, albeit still powered by natural gas. Microgen is located in Doetinchem, has an R&D-facility in Petersborough, England and production in China. Patents probably owned by Sunpower from the US.

Work on the Stirling engine was carried out in the sixties by Philips in Eindhoven, the Netherlands, as well as by Ford and GM in the seventies. But none of these projects made it into mass production.