Archive for the category “transport”

DAF CF Electric drives from Salzburg to Kärnten, via the Großglockner-Hochalpenstraß detour. Max. 12% slope, 3550 m altitude, 326 HP, energy consumption increases from 1.77 kWh/km to 2.7 kWh/km high in the mountains, but on the way down, a lot of electricity is recuperated. Conclusion of the trip: no problems driving a heavy e-truck through the mountains. 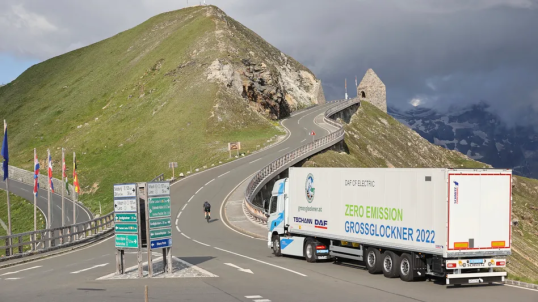 Graphene nanotechnology is set to be one of the most exciting and ground breaking technologies of the 21st century. Nanotechnology has already revolutionised medicine, construction and industry. And now graphene is about to become a reality in electric vehicle batteries, increasing energy density by 40% or more, and reducing charge times to just a few minutes. Is this the push we’ve been waiting for to move EVs into the mainstream?

END_OF_DOCUMENT_TOKEN_TO_BE_REPLACED

The world’s first solar car goes into limited production. This is a very expensive proof-of-concept car, the next model will cost 30,000 euro and will be produced in very large numbers.

The one billion cars on this planet bridge a combined annual distance of about one lightyear. The ambition is that all these cars will do so “solar-propelled”.

[spiegel.de] – Dieses Elektroauto zapft die Sonne an
[wikipedia.org] – Lightyear One
[forbes.com] – Why Lightyear Could Be The Most Game-Changing Car Company On the Planet

From [1:23] Lex Hoefsloot in 2013 in the Australian Outback. Now he is CEO of Ligthyear, 9 years later, with the Dutch answer to Tesla. Fantastic achievement!

END_OF_DOCUMENT_TOKEN_TO_BE_REPLACED

Of the ground crew on Schiphol Airport, the people who handle your luggage outside and are exposed to the jet stream of waiting planes, eventually everybody dies of cancer. Cause: toxic kerosene.

The revolutionary way to store hydrogen as a powder with high energy density: in borohydride. 1 kg = 9 kWh. No hassle with high pressures and heavy steel containers, just put it in a bag.

The Netherlands is putting its weight behind exploring the possibility of hydrogen storage in sodium borohydride. It’s a white powder with 9 kWh worth of hydrogen per kilo (almost as much as diesel), hydrogen that can be released by dripping ultrapure water on it. Afterwards, the NaBO2 residue can be enriched again with hydrogen to NaBH4, repeat cycle. The Port of Amsterdam is going to use this cycle to build a hydrogen-propelled ship:

The Port of Amsterdam expects to take the new management vessel Neo Orbis into service next year with an emission-free propulsion that runs on hydrogen powder. Amsterdam is the first worldwide to test the H2Fuel system, which was developed in the Netherlands, for which powdered sodium borohydride (NaBH4) is used as a hydrogen carrier.

Ships, by nature, have access to water that can be purified on-board, using a reversed osmosis-process.

The Neo Orbis, a PR-ship for the port of Amsterdam, to demonstrate the feasibility of hydrogen as a maritime fuel. The show boat is going to be used to ship wealthy foreigners around through the splendor of the Amsterdam city center and talk them into hydrogen.

This, but then with hydrogen

Inland Ship Anthonie to be Retrofitted for Hydrogen

Dutch infrastructure minister Cora van Nieuwenhuizen announcing the go ahead for retrofitting the inland ship “Anthonie” for hydrogen. The ship transports salt from Delfzijl to Rotterdam.

Hydrogen to power inland vessels: to boost this development, Minister Van Nieuwenhuizen is earmarking 4 million euros for the construction, development, and launch of the Netherlands’ first hydrogen powered inland cargo ship… By 2050, the Dutch inland shipping sector must be zero-emission. The new inland vessel is expected to be launched by 2023.

Toyota Brings a New Hydrogen Engine to the Market

Of all major car manufacturers, Toyota is the one that consistency stayed loyal to its belief that hydrogen could play a major role in future automobility. I believed that too, but recently so much progress has been achieved on both the battery and the electrolyzer front, that I now tend to believe that batteries and hydrogen will coexist, just like diesel and gasoline do today.

END_OF_DOCUMENT_TOKEN_TO_BE_REPLACED 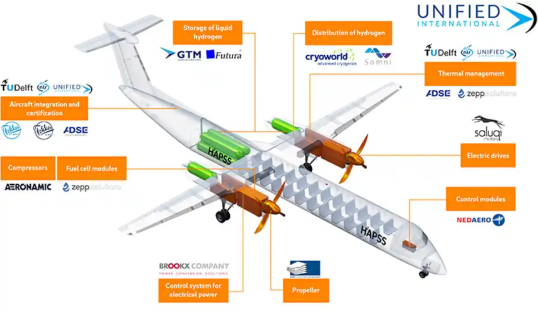 The first commercial operating hydrogen plane will have between 40-80 seats. The liquid hydrogen will be stored in the tail, not in the wings and converted into electricity before it is sent to the propellers. Technical challenges are handling high pressure and temperatures.

A large Dutch consortium of 17 partners named Hydrogen Aircraft Powertrain and Storage System (HAPSS), with heavy involvement of the Dutch government, has announced that it plans to have a first hydrogen flight service operational between Amsterdam and London by 2028. If this plan succeeds, Airbus will be beaten by 7 years.

The idea is to retrofit an existing turboprop aircraft to fly on hydrogen, rather than jet fuel. This innovation could open up a market of €16bn for Dutch industry. This plane could be interesting for sparsely populated Scandinavian countries or New Zealand. There is world-wide a potential of 1500 existing propeller planes, that could be made suitable for flying on hydrogen.

The plane would fly a little slower (600 kmh) and have a range of 750 km. Research has shown that 9 out of 10 people are willing to pay more for emission-free flying. Happs estimates that tickets will be 10% more expensive than with conventional aviation fuel.

This also could mean a second life for former Dutch aircraft manufacturer Fokker, that used to make planes as OEM, but after its 1996 bankruptcy, merely lead a life in the shadow as production facility for others like Airbus, Boeing, en Lockheed Martin (F35). This could change.

Imagine a car that can charge using the sun, can generate an income via a car sharing scheme and is also affordable to buy. Sounds like a pipe dream, right? Think again – say hello to Sono Motors’ Sion electric car.

Jack heads to Northern Munich to see how the 2015 prototype of the Sion has advanced to a 2021 version which has 7.5 square metres of solar panels now beautifully integrated into this spacious and practical electric car. With an average of 70 miles of range being added every week from being just parked outside, and up to 150 on a sunny week, you could feasibly do all of your driving using solar power. But don’t panic, you can still charge by plug if you need extra miles!

Yes, the Sion might lack luxury and have less tech than other electric cars on the market, but this is what is so great about it as they have designed this car to make it affordable. Also, which other EV do you know of that has moss inside the dashboard? It’s straightforward, simple and makes so much sense.