Archive for the category “offshore”

Ran unexpectedly into this visible aspect of the Dutch renewable energy transition during a recent sea-side holiday: grid operator TenneT laying the cable that will connect future offshore wind farms near the coast of Wijk aan Zee and the Dutch national grid, see map below. The to be connected wind farms “Hollandse Kust Noord (HKN)” and “Hollandse Kust West-Alpha” are planned to be up-and-running in 2023 and 2024 resp. For that purpose, 69 Siemens-Gamesa turbines will be deployed in this HKN 759 MW project, developed by Shell and Eneco; installer: van Oord:

Total Dutch offshore wind capacity is planned to be 11 GW by 2030. 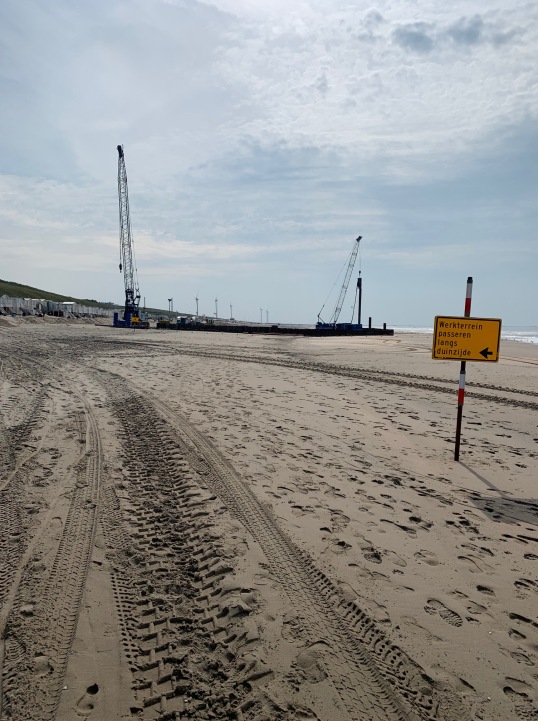 The pictures were taken at location WKT1.

END_OF_DOCUMENT_TOKEN_TO_BE_REPLACED

Two GustoMSC™ designed NG-20000X jackup ships, capable of handling 20+ MW offshore wind turbines, have been ordered at COSCO Shipping Heavy Industry by Cadeler. Expected delivery date: 2024-2025. GustoMSC is a daughter company of NOV. These ships will be the largest in the industry. Siemens has already reserved the future vessel for work at a UK wind farm. 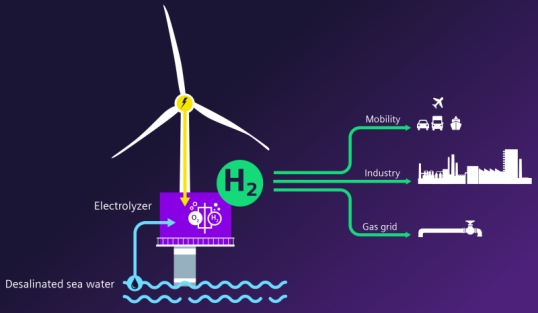 The German government has awarded Siemens-Energy with 100 million euro to develop an integrated offshore wind-turbine with onboard electrolyser. This makes the location of the wind turbine independent of cabling considerations. The interior of the wind turbine offers more than enough space for large quantities of hydrogen, reducing the number of visits from tanker ships. The R&D activities are taking place within the framework of the H2MARE project.

Island nation Japan is surrounded by very deep waters, eliminating the possibility of monopile-based wind farms. So floating wind must be applied. But laying cables in waters of many kilometers deep is problematic. So engineers of the company PowerX came up with a floating battery solutions. Unmanned ghost ships, stuffed with batteries with a cumulative capacity 200 MWh will be commuting between the floating OWFs and mainland Japan.

The Japanese government has OWF ambitions to the tune of 10 GW by 2030 and 30-45 GW by 2040. This electricity will have to be brought onshore, one way or the other.

The world’s largest offshore converter station has been installed at the Jiangsu Rudong offshore wind farm in China’s Yellow Sea.

SBM Offshore is a Dutch company, specialized in servicing the offshore oil business. If there is one company well-placed to open up for new offshore business opportunities, it would be SBM Offshore. The company has just expressed its wish to participate in 2 GW floating offshore wind, around the globe.

A traditional oil service company expanding its business into renewable energy, is the best possible sign that the renewable energy transition is working. It also is an enormous boost for floating wind, implying that offshore wind is going global, after so far being confined to the shallow waters of the North Sea.

What SBM Offshore does for a living.

END_OF_DOCUMENT_TOKEN_TO_BE_REPLACED

Five European offshore wind foundation companies have formed an alliance, named OWFA, in order to streamline coordination with the EU and kindly remind the latter of its ambitious 2050 decarbonization program (and shove in the billions while they are at it).

The objectives in their own words:

Installing offshore wind turbines, with a ship on stilts, remains a risky business. The Chinese Sheng Ping 001 jack-up vessel has toppled on July 25. Four people are missing from a crew of 65.

Other jack-up ship accidents in the past (Denmark and Africa):

The European Offshore Wind Deployment Centre (EOWDC), also known as the Aberdeen Bay Wind Farm is an offshore wind test and demonstration facility located around 3 kilometres off the east coast of Aberdeenshire, in the North Sea, Scotland. It was developed by the European Offshore Wind Deployment Centre consortium. The scheme is relatively small – it consists of 11 wind turbines with an installed capacity of 93.2 megawatts. It is located between Blackdog and Bridge of Don near Aberdeen. First power was generated in July 2018,[6] with full commissioning following in September 2018

Pictures from another offshore wind farm near Yangjiang (Nanpeng island).

Henrik Stiesdal (born April 14, 1957) is a Danish inventor and businessman in the modern wind power industry. In 1978, he designed one of the first wind turbines representing the so-called “Danish Concept” which dominated the global wind industry through the 1980s. Until 2014, Stiesdal was the Chief Technology Officer of Siemens Wind Power. During his professional career, Stiesdal has made more than 175 inventions and has received more than 650 patents related to wind power technology.

Currently, he is involved with the development of TetraSpar floating wind turbine. His goal: provide the world with affordable offshore wind, almost irrespective of location, read: water depth. Only wind speeds will matter.

TetraSpar turbines can be deployed at 100-1000+ meter water depth. No need for expensive specialized installation vessels; they can be completely assembled at the port, using regular crane infrastructure and towed to its final destination and moored there. Soon, 15 MW floating wind turbines will be operational. Manufacturing takes place indoors, parts can be assembled outside without welding.

END_OF_DOCUMENT_TOKEN_TO_BE_REPLACED

Scotland could become the world’s premier address for floating wind. It doesn’t have shallow waters like Denmark, Germany, the Netherlands and England have, but what seems to be a disadvantage at first sight, doesn’t necessarily need to be one. Scotland is the windiest country in Europe, that helps. And a huge monopile can be replaced by three cylinder-shaped floaters, that don’t tie that much more steel resources.

The point to make is that around the world, there is so much more deep than shallow water, even near the coast (think Japan, Norway, US, China, Singapore and many other places), that mastering this floating wind technology opens up a huge range of new green business opportunities. Additionally, you won’t need an expensive monopile installer ship; the installation can be assembled onshore and simply towed to its final destination.

Oil and gas major Shell and Iberdrola-owned Scottish Power said on Friday they had joined forces to bid to develop large-scale floating wind farms off the coast of Scotland.

The companies said they had submitted proposals for the potential projects as part of Scotland’s offshore wind leasing round, called ScotWind, which closed for submissions on Friday…

Other energy companies and investors have signalled interest in the leasing round, including France’s TotalEnergies, Macquarie Group’s Green Investment Group and Orsted.

Scotland could very well follow the example of Ireland of 100 years ago and manage to become independent of economic black hole Brexit Britain and be just as prosperous as their Celtic brothers on the other side of The North Channel. Floating wind could be a marvelous export item for a reborn nation with world-wide recognized razor-sharp identity, that was independent since the days of Romans until 1707 and become a member again of the European family of nations.

In the ScotWind Leasing Round, around 50% of the Draft Plan Option (DPO) areas are located in “deep water zones”, which have water depths greater than 50 metres… for water depths greater than 60 meters, fixed-bottom offshore wind foundations become uneconomic, even though a recent study suggests this frontier might be 90 m. Others believe that the transition between fixed to floating foundations occurs in a zone between 40 to 60 m…

END_OF_DOCUMENT_TOKEN_TO_BE_REPLACED

The Future of the North Sea, Europe’s Largest Power Plant

Denmark, Norway, the United Kingdom, Belgium, the Netherlands, and Germany are set to build a series of wind farms that will change the way the North sea operates. The creation of energy islands and hubs will turn the region into a center for Europe’s energy transition.

What role will the North Sea play in Europe’s future?

The Vestas 15 MW offshore wind turbine is merely 5 months onto the market, and already it has a good chance of being deployed in the upcoming 900 MW German offshore wind park “He dreiht”.

Watching the video is just as interesting as watching the grass grow in your garden. The Heerema Sleipnir picked up the jacket in Norway and installed it days later in Dutch waters.

Located 22 kilometres off the Netherlands coast, the 2,852-tonne jacket will support TenneT’s 700 MW Hollandse Kust Zuid Beta transformer platform which will be ready for use in 2022.

Hexicon is a Swedish offshore wind design, where floating twin rotors are automatically direct themselves towards prevailing winds. Recently, a scale model was successfully tested in the Marin test center in the Netherlands. The next step is to evaluate the test data in order to achieve a pilot at Metcentre in Norway in 2023.