Archive for the tag “ASPO” 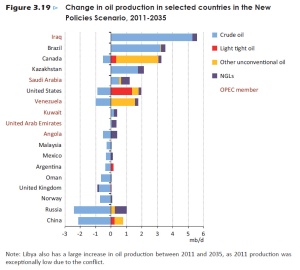 The IEA recently presented its World Energy Outlook report for 2012. Kjell Aleklett, chairman of Peak-Oil club ASPO took a look at it and discussed the report in an article linked to below. Aleklett challenges the findings of the report and instead believes that “During the coming 50 years the production of oil will fall by half“. The IEA believes that global oil production will rise until 2035, with contributions from main players as follows, where the plusses (Iraq, Brasil, Kazakhstan, Saudi-Arabia, Canada, USA, Venezuela) dominate the minusses (Russia, China, UK, Norway):

The IEA believes that this will be the future of US oil and gas production, with large increases in production of unconventional oil and gas: 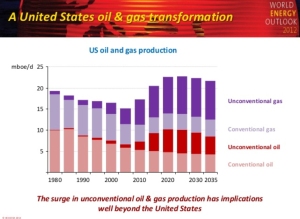 The prediction made by the IEA is that by 2020 the US will overtake Saudi-Arabia in oil production.

It is interesting the see the IEA’s development of predicting SA’s output for 2030 in time:

Implicit message from the IEA to the world: “do not take our predictions serious“. Message from us to the IEA: “we won’t“.

Nate Hagens, himself ex-Wallstreet, talking about ‘elephants in the room’. Includes financial aspects in his story.

END_OF_DOCUMENT_TOKEN_TO_BE_REPLACED

Moderately upbeat story by UK’s Jeremy Leggett about the possibility of a successfull energy transition. Nice insider information of the ‘Yes minister‘ quality of British politics. Leggett believes in technology. We would like to add that we have no choice but to believe in technological solutions. Leggett worked for big oil and is a trained geologist.

The reference to the IEA report “Are we entering a golden age of gas” is here:
[iea.org]

Closely related an article in The Economist:
[economist.com]

Robert L. Hirsch is one of the leading figures in the ‘peak-oil movement’. His prediction: global oil production (conventional + unconventional) will start to decline in 1-4 years.

The End Of Cheap Oil

The article “The end of cheap oil” by Colin J. Campbell and Jean H. Laherrère kicked-off the ‘peak-oil movement’ in 1998. From this article there is a direct line to the founding of the world-wide ASPO organisation.

[peakoil.nl] Summary of the ASPO conference in Dutch.

Kjell Aleklett discusses peak oil in historical perspective. Aleklett predicts that in total another 200 billion barrel will be discovered in the future. He also links the current economic crisis in Europe to the energy situation and is convinced Europa will lose 50% of the current level of oil import until 2020. Peak coal production will be ca. 2030. Scepticism regarding global warming: CO2 emission will decline as a consequence of fossil fuel depletion. Core message: time is running out!